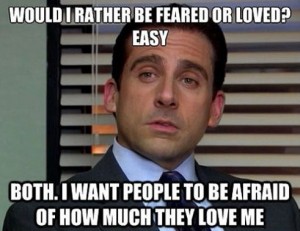 Each workplace is different.  From the look and feel of the office to the responsibilities of each employee, day to day business is different for everyone. These distinctions may be contributed to company size, industry, management, location, etc., but it is always interesting to see the commonalities between even the most dissimilar of workplaces.  We’ve all had those conversations with a friend that involved “oh we have someone just like that at my company!”  So who exactly are these different employees found in almost every office?  Well, check them out and see if you recognize any of these specific personalities among your coworkers… If so, enjoy some tips on how to deal with them.

The Know It All.   Now this person isn’t always as annoying as their title suggests.  Sometimes, it’s extremely beneficial to have this person on hand for any random questions or information.  They’ve most likely been at the company for a while, so know all the in’s and out’s of your product and process, but they certainly like to let everyone know it as well.  And this applies to everything.  You had a friendly football game over the weekend; they were All-State in high school.  You went on vacation; they have a house in Europe.  So yeah, every once in a while it does get annoying.  Approach this person with caution, and always be fully prepared if you must work with them.  If a debate ever arises, sometimes it’s just best to politely nod and agree than to keep fighting your side.

The Cubicle Invader.  This person may be super friendly, but they need a serious reminder in what personal space is.  They like to just “pop in” a lot more than you’ve actually welcomed them to, and get a lot closer to you and your stuff than socially acceptable. Often, they find it fun to come take a look at what you’re working on.  Definitely, not cool.  Prepare with a good defense.  Make your space a little less welcoming when you sense they may be approaching, or just get rid of that guest chair they’re constantly taking advantage of once and for all.

The Gossip Queen (or King).  This title goes to that coworker that just loves to stir the pot.  If there’s a rumor going around the office, they most likely started it.    They can usually be found whispering through cubicle walls, seemingly more concerned with the personal lives of employees than getting ahead in their career.  They also may be the company party planner, organizing the next pot luck lunch or birthday party.  Basically, their priorities seem slightly skewed.  Try not to get too involved with the gossip spreading, but it wouldn’t hurt to have this person on your good side, especially around your birthday.

The Little Miss Sunshine.  Don’t be fooled, this person could very well be a guy.  They’re always smiling and waving their cheerleading pompoms when someone does well on a project or makes a sale.  They’re fantastic for your self-esteem, but often leave you wondering how any one person can be so darn happy all the time.  Maybe you should take notes, or at least turn to them when it’s been a rough day.  Their optimism may be a bit much at times, but it could also do you some good!

The Gung-Ho New Hire.  Welcome to the new hire with a ton of pent up energy that’s just bursting at the seams for their new role.  They may be a little overly prepared as they show up on day 1 with a list of things they hope to change or achieve, but their spunk is certainly admirable.  They have yet to be jaded by the frustrations of their role, which you hope lasts as long as possible.  At times, you may find yourself referring to them as Captain Obvious as they try to be as thorough as possible and make big deals out of pretty minor things.  Welcome this person, but give them a little space to adjust and figure things out on their own.  Don’t be the one that bursts their bubble, but instead help when you can, so they become accustomed to the work culture.

The Loud One.  Someone must have told the funniest joke known to mankind, or it’s just this employee uncontrollably laughing as per usual at something not that funny.  Their voice can be heard 5 cubicles over and they seem to love when people can overhear their conversations.  Whether they’re on the phone, chatting with a coworker or talking to themselves, this person’s presence is always known.  If you’re bold enough to say something about their volume, then it’s worth a shot! They may take offense to your suggestion to keep it down a bit, but it’ll benefit the entire company if you do.  It may involve you spending some time getting to know this person a little better so they don’t take quite so much offense to your advice, but it’ll be worth it.

The Lifer.  This person’s been part of the company through every big project, bad logo change,  new hire and more.  The company should basically be named after him since he knows everything that’s happened since day 1. He has seen employees come and go over time, and is a staple at the company, but he’s also somewhat depressing because he doesn’t even pretend he still has any motivation to succeed or move on.  You admire his longevity, but are secretly hoping you never become that.  Take his knowledge with a grain of salt, but feel free to enjoy his stories and memories of your company’s past.

The Office Creep.  Every comment is just one step too far.  It’s always funny until this person crosses that line, and then everyone is forced to choke out an awkward laugh or casually leave the conversation.  They may be harmless, but you also wouldn’t be surprised if their behavior has gotten them some sort of record in the past.  Just try and keep your distance, so that way you don’t have to force any friendly banter in an uncomfortable situation.